In the eleventh century, Cnute, the Viking king of Engla-lond and Scandinavia, sails with his son, Harald, and his shield brothers to Rome. Thrown off course by a storm, they follow the route up the Rhine.

When Harald hangs back to assist Selia, a beautiful Frisian woman, his path turns perilous. Newfound enemies, retainers of Robert the Devil, Duke of Normandy, pursue them. Harald, Selia, and their companions fail to rendezvous with King Cnute, and are forced to travel cross-country on horseback. If Duke Robert’s plan to assassinate Cnute succeeds, an invasion of Engla-lond will follow.

Can Harald and Selia reach Rome in time to warn the King?

The prow of our longship broke the waves, the salt spray stinging my eyes. My legs bent, and my feet shifted naturally at the rise and fall of the sea. Always, it was the same, when the unfurling sail caught the wind and the ship surged forward. Like when you put heels to horse and she runs. The same. My spirits rising. The sun glistening off the surface of the sea.

This was more to my liking than learning the ways of the realm, for surely my royal Danish blood was many parts seawater.

I turned and watched my father, King Cnute, standing with his back to the mast. At forty years, Cnute was past his prime now, though he still maintained the strength of his sword arm, and the force of his will could not be broken. With his red cloak wrapped around him and the bronze circlet on his brow, my father looked out toward the other longships as if his gaze alone was enough to gather them in, to keep the wolf pack together. Four drakkars or longships, sixty men, and a string of horses, an adequate force for a raid, but a mere fighting band in a battle.

At that moment, he saw me watching him.

“Harald, my son,” he called. A broad smile lit up his face. I could tell the wind and waves had ripped the weight of kingship from him. “It’s a fine day to be a Dane.” He laughed in that way of his, tossing his head back, so his long mane of gray-blond hair blew in the wind.

I left the prow and walked the pitching deck to join him.

“We’ll make the Norman shore by nightfall.” His voice rose above the sound of the wind. “The weather will hold so the ships can return with the morning tide.”

“I wish we were sailing all the way to Rome,” I said. “I am more at home on a deck than a horse.”

“As am I. But I have need to see the kingdoms of the Holy Roman Empire. There is much to learn—for both of us.”

I tried to discern if my father alluded to some of my past lapses of judgment: fits of childish anger directed at him, a fondness for ale beyond my ability to control my behavior, and a tendency to be overwhelmed with love for a pretty face. This time, as at others, I could not read what lay behind his words.

My father continued. “This system the Normans and Franks use—fee or fief they call it—I would see how it functions, whether it enslaves those who work the land, or secures them.”

“Your subjects prosper, Father. Is there need for change?”

He looked at me shrewdly, wiping seaspray from his face. “Perhaps not. Let us say we shall borrow that which we deem to be good and make note of the rest. A king should always know about his friends, for one day they may be his enemies.”

“May God will all your days be lived in peace,” said a voice behind me.

“Your Eminence,” said the king.

I had not seen Archbishop Lyfing approach. He was a short, thin man, and his bishop’s robes only made him look smaller.

“The Duke of Normandy’s representative will be watching for us,” the prelate said. “He will not want to miss collecting the passage toll.”

“I bear a letter from the Holy Father,” the king replied, “that will serve as a pass through the toll collectors in any Catholic lands.”

Lyfing was caught off guard, but replied, “I wasn’t aware of this arrangement.”

“You are my Archbishop of Canterbury and my confessor, but you are not privy to all matters of state, Father Lyfing.”

For a moment, the archbishop’s arrogance faded from his countenance, though he recovered quickly, making a slight bow to the king. Whenever Cnute addressed Lyfing as “Father,” he was reminding the man of his humble priestly beginnings, a role he could be reduced to if he displeased his King.

Not able to keep the smile from my face, I asked to be excused. My father nodded and continued his conversation with the churchman. I made my way toward the stern where my two best friends, Torsten and Gwyn, fished with hand lines ahead of the steersman.

I said, “It looks to me the crew will be eating salt pork for supper tonight, not sea bass.”

“The passage is not yet over, young princeling,” Torsten replied. “Chide me at the day’s end.”

Gwyn grinned. “If we land something spiny and full of worms, we’ll save it for your highness’ supper.”

We shared the laugh. Torsten, Gwyn, and I had grown up together. Our fathers had fought as shield brothers in the taking of our English kingdom. To be included in this journey was an honor for their families.

The company of our friend, Gwyn, could not be equaled. He loved to jest or tell a tale around a campfire or over horns of ale. Like most Welshmen, Gwyn was dark and short in stature, a wild barbarian in a fight.

Torsten had a different nature. With a Danish father and an English mother, he stood tall and blond like a Northman. The impression he gave to strangers was of a quiet shyness. But those who sought to take advantage of that lack of brashness suffered for their mistake, for although Torsten was gifted with patience and forbearance, the embers of injustice could be quickly fanned when the need arose. In our world, the need did most often arise.

Of the three of us, I would have to admit to being the most hotheaded and impulsive. I had once chosen like-minded companions, but our antics many times reached the ears of the king. It is one thing to be reprimanded by one’s father; it is quite another when one’s father is the king of the realm. Cnute made it a clear choice: either pursue a royal path or be on my way to the devil. My former companions found themselves shipped off to rustic and unknown relatives in different parts of my father’s vast kingdoms. I found better friends.

“Look, Harald,” said Gwyn, checking his fishline, “what’s all this Holy Roman whatnot we’re off to?”

“Aye,” said Torsten, “the king’s not one to give his rowers lessons in statecraft.”

“That’s because you’re better at rowing than listening.”

Torsten reached over to cuff his friend on the head, but Gwyn ducked the blow.

“Both of you listen, and I’ll explain it to you,” I said. “You know Cnute rules the northern lands of Engla-lond, Danmark, Nordvegr, and parts of Sverige? Well, the kingdoms directly south, in central Europe, are tied together as the Holy Roman Empire. This is not the Empire of the old Roman legions, but a Christian alliance of kingdoms under a monarch who is appointed by the Pope in Rome. A new emperor is to be crowned in Rome, and this voyage from Engla-lond, across the Narrow Sea, is the first leg of our journey. Once we get to Normandy, we go overland. I don’t know the whole route, but we keep heading south, all the way to Rome.”

“And that’s why the archbishop’s crawled out from ’neath his rock, isn’t it?” said Gwyn. “So he can sample the Pope’s wine.”

“I’m sure there are many reasons for Lyfing to be with us. One is to make our King appear to be more than a northern barbarian. Another is to strengthen our ties with the Holy See. Does this all make sense?”

“Clear enough,” Torsten replied, peering down at the sea.

“Perfectly clear, Harald,” said Gwyn. “Except the part about the Holy See. I thought we were going overland, didn’t I?”

Just then Gwyn’s line jerked taut, and he struggled to keep hold of it. “Now if you’ve finished preaching to the ignorant, could you help me pull in your supper?” 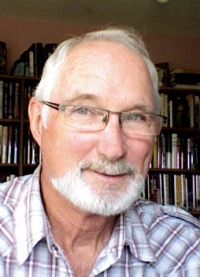 Garth Pettersen’s short stories have appeared in a number of anthologies, and in journals such as Blank Spaces, The Spadina Literary Review, and The Opening Line Literary ‘Zine. His story River’s Rising was awarded an Honourable Mention for the Short Story America 2017 Prize, and his fantasy novella, River Born, was one of two runners-up in the Wundor Editions (UK) Short Fiction Prize. The Swan’s Road is his debut novel. He is a Canadian writer who lives with his wife on a farm in the Fraser Valley near Vancouver, British Columbia. When he’s not writing, he’s riding horses and working with young, disabled riders.