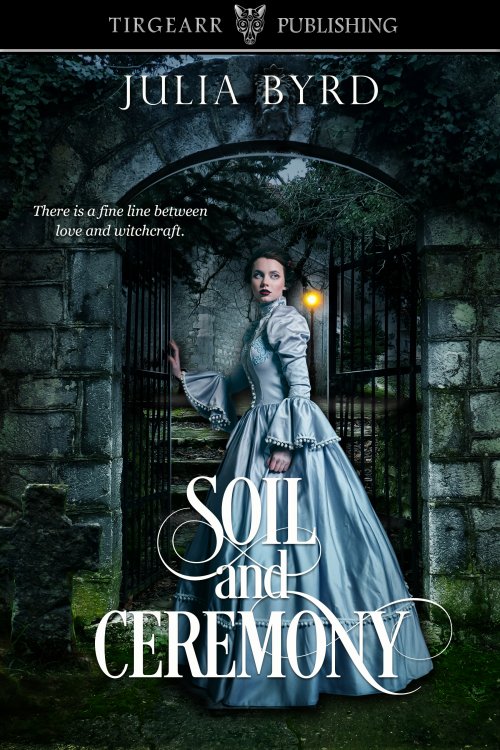 A history of loss and a terrible stammer have led gravedigger Benjamin Hood to a life of isolation.

When a rash of untimely deaths sweeps through his small English village, he cannot stand by in silence. To uncover the truth about the lives lost, he takes up a long-neglected role of responsibility among the townspeople.

As Benjamin questions the victims’ families, he finds that beautiful widow Juno Stephens has preceded him in each case. She makes no secret of her odd midnight ceremonies and dark powers of persuasion. The villagers are whispering about a woman bearing a lethal hex.

Is Juno the source of danger in the village, or a victim of it? Benjamin must resist her beguiling ways and decide if he can trust her…until another death sets his smoldering worries ablaze.

It was easy to dig the grave for the infant boy. It should have been difficult, the hardest task on earth to accomplish. Instead, I scarcely perspired as I shoveled dirt from a tiny rectangle. The job would soon be done, and I would be no different for it. I should have wept. I should have torn the calluses from my palms. I should have bled into the dirt.

But after it was done, I stabbed my spade into the rich autumn soil of Maida Green and straightened. I would do it again next week, or perhaps the one after. Babes die too often for a gravedigger to weep and rend and bleed each time. Apart from his mother, who carried him for months beneath her heart, nobody really knew the lad.

My apprentice worked on the other side of the path, hacking at a recalcitrant Cornus alba, a red-barked dogwood. He was watched over by the hulking manor house on a hill beyond the cemetery walls, called Maida House. One wing of the house was over two hundred years old, but Maida Green Cemetery was young, with fifty acres occupied by only a few hundred permanent residents. Its acreage had been portioned away from the traditional Maida House property like a severed limb. On quiet days, working in the cemetery was like working in a verdant park. We cut open the ground for more shrubs than graves, and pillars of smoke more frequently rose from burning leaves than burning incense. No smoke ever rose from the chimneys of Maida House.

“T-Toth,” I said, pulling my gaze from the house’s dark windows. His Christian name, Everett, was too much for my traitorous tongue. “L-l-leave some of th-those s-stems.”

My thoughts were clear, or as clear as any man’s, I suppose, but my words were not. As a result, I mostly kept my lips sealed. But Everett did not mind my stammer, and neither did the dead.

“I will,” he said. “They’ll look right cheery this winter.”

“The south wall, I know. I’ll go over there next.”

I did not like being interrupted, but I liked it better than becoming stuck in a repeating loop, words swirling like a leaf in an eddy. I grunted an acknowledgment and turned for the groundskeeper’s cottage. I wanted to put the shovel away and check the log for burials planned for the next week.

I stopped, turned, lifted my eyebrows.

Everett crouched over a patch of dirt, peering intently at something. “What used to grow here?”

The cemetery kept no secrets from me, but I never claimed to have memorized all the plantings. I walked back to him, then sank down on one knee in the grass. There was a little hole in the dirt, right beside the Cornus alba. “D-don’t know.”

“Something was dug out.”

He turned dark brown eyes on me. “Did you dig up anything?”

I shook my head.

Everett touched the crumbling edge of the excavation, then rubbed his fingers together, face tightening in concentration. He appeared much more interested in the hole than I was. When I had saved the money to buy my brother’s farm, Everett would become the head groundskeeper at Maida Green. It was a good thought, a consoling thought. He deserved it, and he cared as much about the place as I did. Maida Green had been conceived when the old London cemeteries reached their fill of occupants. In the city, the dead sifted up through the soil, gleaming skulls and unseemly scapulae sprouting in the grass. But in our village, a few hours’ ride northwest from the dome of St. Paul’s, we had plenty of space. The walls were high and the gate strong—to deter the body-snatchers and anatomists from coming to take our fresh corpses. Families paid well for eternal rest.

“Hmm. No scat or claw marks. Not a mole, then, nor a badger.” Everett smoothed dirt into the hole. “Probably nothing. I do wish that Horvath boy hadn’t died. Making me twitchy and mistrustful, and I’m not the only one.”

I rose and started back towards my cottage. The main gravel path had an offshoot, a narrow track that curved behind a group of young trees and led to the groundskeeper’s cottage. It was snug and dry, with a pump in the yard that delivered cold, sweet water. Sometimes, after the gates were locked at night, I imagined I slept in a manor house with my own manicured parkland spreading around me like a green quilt.

As I returned the shovel to its hook under the sloping lean-to on the side of the house, something made me pause. The cemetery’s huge shears, steel-bladed with leather-wrapped grips, hung in the wrong place. Everett could have put them away incorrectly. I could have done it myself. But neither of us had tied a black silk ribbon around the pivot or threaded onto the ribbon a tiny slip of paper. For a moment I just stared.

The ribbon came loose with a tug, and I unfolded the scrap of paper. On it was written two words in a flowing, feminine script.
Thank you.

I jerked my head up and looked around. Was she still nearby? Surely one of us would have noticed a woman wandering the premises. Women frequently entered the cemetery, visiting graves and leaving flowers. But they didn’t borrow my shears.

The silk ribbon snagged on my rough fingertips, and on some impulse, I lifted it to my nose. It smelled of…nothing. It was just a strip of fabric. Had I expected to catch a lingering whiff of rosewater? Lavender? I snorted at my own fancy and jammed the note and ribbon into a pocket.

Julia Byrd lives and writes in Brooklyn, New York, with her handsome dog, and scruffy husband, although a large piece of her heart remains in her native Illinois. She tells people she enjoys books, wine, dogs, trees, and architecture as plausible cover for her secret double life.