To celebrate Valentine’s, The Final Straight has been reduced to 99p / 99c on Kindle

April Miller works for her best-friend, Max Knight on his livery and competition yard. Their friendship has withstood many turbulent times, and while April is deeply in love with Max, she is also aware of his womanising ways and has refused to succumb to his flirtatious charms. When her ex, AJ, suddenly comes back with a business proposal, April finds herself torn between the two men.

April stared at the few black blobs on the screen. She knew they should have formed sentences, but her mind was elsewhere and unable to create readable words out of the muddle. The biro’s plastic end crunched between her back teeth.

She’d managed as much as ‘Dear AJ,’ when a knock on the door disturbed her. Max poked his head around and gave her the same soulful puppy-eyed look he always did after he’d managed to upset her.

“What do you want, Max?” she asked, pretending to be engrossed in whatever was on her screen.

“Peace offering,” he said, walking in and putting the mug of tea by the mouse pad.

She looked up at him. The frustration and irritation faded. “I’m sorry for snapping.”

Max sank into the chair opposite. “I’m sorry for…”

April raised her eyebrows, waiting for him to finish the sentence. “Shagging everything in sight?” she suggested. “You need to watch yourself.”

“I don’t think you do. Every time your bedroom antics are flaunted, I get a phone call. Six o’clock this morning and Banks was on the phone screeching at me. You hadn’t even got out of the shower and I was helping him load his horses onto a lorry.”

Confusion spread across his face, giving him the look of an innocent teenager.

“She woke up, and you weren’t there,” April reminded him. “Of course she’s going to ring her dad, who, may I remind you, has a shotgun license. You’re lucky it was only money he was cutting off.”

April hummed, not sure whether to believe him. “They are the second client we’ve lost this month because of you. I’m fed up of having to placate pissed off husbands and fathers.” She rubbed at the corners of her eyes as her contact lenses began to itch. “We have a board meeting next week. Please don’t make me ask them for more money.”

“Hey,” he cooed, sweeping around to her. He knelt by her leg, taking her pale knuckles in his hands. “You won’t need to.”

“I will if we run out and I can’t pay the bills. I can’t afford to forfeit my wage to support this place.”

“I do have something for you to consider.”

“What? Anything if it will cheer you up.”

“The college rang and asked if we’d be willing to take on a work experience girl over the summer holidays.”

He dropped her hands, stood up, and began to pace in front of the desk. “You know how I feel about that.”

“It would be free labour, good publicity, and we’d be helping her out. Good karma, which is something I think you need.”

“I just have…” he hovered around the words. “Standards.”

“I’m asking you to hire her, not sleep with her.”

What the readers are saying:

I can remember some of the first horse stories I read as a child and this is NOT one of those, no, this is a story for grownups who want a love story with a complex plot . . . I have to say that I enjoyed this story written in British dialect. As an American it is always intriguing to learn new terminology and phrasing while reading a new story. The flashbacks were numerous but fit in with the story . . . I liked the characters in the book and was rooting for April to make the right decision in the end. ~ Cathy Geha, Goodreads

The Final Straight is a straightforward; no holds barred sort of romance, and rather fun to get caught up in. Author Charlotte Howard makes excellent use of time jump to convey the back story of her characters. The plot is sensational enough to be fully believable to most equestrians, and the pacing is spot on. There is a comfortably familiar edge to this novel: it fits within its genre precisely as it ought to. Whilst the central characters are far from being perfect people, they are exactly the right people to carry this storyline. A fine balance is kept between poignancy and insufferableness – it is difficult not to want to intervene and tell them all to see sense! And that is undoubtedly a key aspect where this sort of romantic fiction is involved. Although far from a novice read, given the explicit nature of some of the material, this novel remains forward going enough to satisfy from start to finish. With just enough personal tragedy and growth in the mix, it is a thoroughly enjoyable journey to follow. ~ E.V. Greig, Goodreads

A gripping story . . . A little bit of every emotion and enough twists to make you want to see it through to the end. ~ Natalie, Goodreads 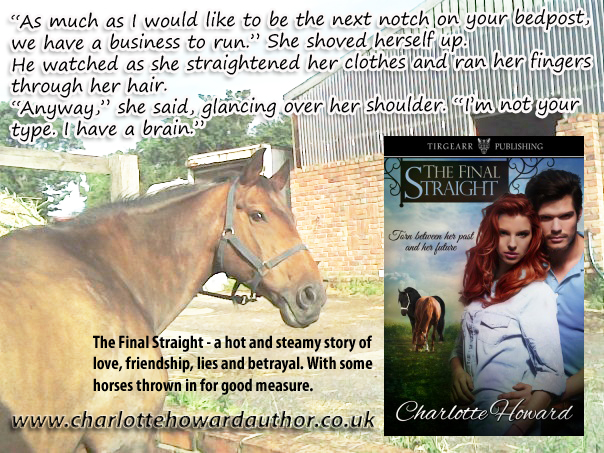