I’d like to thank the lovely Charlotte Howard for kicking off the Grace Marshall Executive Decisions Blog Tour on Slippers or Stilettos. It’s a pleasure to be here!

What better way to begin a blog tour that with a giveaway? I’m celebrating the tour by giving away two print copies of the first book of the trilogy, An Executive Decision. Enter to win at the end of this post. 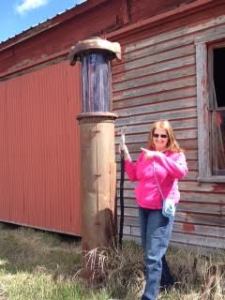 There are lots of different ways a hero in a romance novel can show his power, and he’ll be expected to show his power if he’s going to win over the heart of the heroine and waltz her to their Happy Ever After. Harris Walker has lots of power to show. He’s hot, sexy and outdoorsy with a deep sense of justice. He does the hero thing really well and in an especially endearing self-deprecating way.

Yup! Hot, sexy, powerful heroes are to be expected in any romance novel, but today I want to talk about the power of a woman, and frankly, Stacie Emerson is one tough lady! Stacie doesn’t do Pilates nor lift weights. She’d probably trip over her own feet and break an ankle if she tried to run on a treadmill. In fact, Stacie often has trouble standing up on her own two feet sometimes. Stacie’s a klutz and has been all of her life. In An Executive Decision, book one of the trilogy, Stacie bumbles and fumbles and nearly wrecks the relationship of Ellison Thorne and Dee Henning, the hero and heroine of that novel. Of course her intention was just the opposite. Stacie is a hopeless romantic and would love nothing so much as Happy Ever Afters all around, but sometimes Stacie’s a bit too enthusiastic for her own good.

When our story begins, Harris doesn’t much like Stacie because her romantic nature hasn’t served her well so far. Though she’s now happily divorced from one Thorne brother and good friends with both, she has a history with the Thornes, and it’s not a good one. She eloped with Garrett Thorne while she was engaged to his brother Ellis. Ellis is now engaged to Harris’ best friend, Dee, and both the Thorne boys are well on their way to a Happy Ever After. But Harris is not about to cut Stacie any slack even though she was just eighteen when her love life majorly derailed.

To Harris, Stacie seems like a disaster waiting to happen, and he doesn’t want her happening to him. Yes Stacie is pretty – in fact, she’s beautiful. Yes Stacie is sexy – sexy enough to seriously disrupt Harris’ ability to think clearly at times. And yes Stacie is persuasive. But beneath her strange mishmash of klutz and cosmopolitan polish, Stacie is a powerful woman, a woman who has endured way more than anyone knows to become the owner of a successful gallery in New York City – one that was well on its way to bankruptcy when she took it on. More than that, Stacie is a woman who is about to, willingly, endure a whole lot more to break free from a dark past that haunts her, a past only she knows about. And once Harris discovers the power of the woman, his world, and his heart, will never be the same again.

Book 3 of The Executive Decision Trilogy

Successful NYC gallery owner, Stacie Emerson, is ex-fiancée to one Thorne brother and ex-wife to the other. Though the three have made peace, Ellison Thorne’s friend, wildlife photographer, Harris Walker, still doesn’t like her. When Stacie convinces Harris to exhibit his work for the opening of her new gallery she never intended to include him in her other more hazardous plans. But when those plans draw the attention of dangerous business tycoon, Terrance Jamison, Harris comes to her aid. In the shadow of a threat only Stacie understands, can she dare let Harris into her life and make room for love?

As successful gallery owner, Stacie Emerson, finds herself in the clutches of a powerful enemy from her dark past, her growing feelings for her latest exhibitor, wildlife photographer, Harris Walker, could get them both killed. Sharing her secret could destroy their relationship, but keeping it could be fatal.

The band cranked up a notch and blared an ear-splitting version of REO Speedwagon’s Riding the Storm Out. It was only then that Harris realized the place was nearly full. Kyle Waters returned to the booth. His shirt was partially unbuttoned, his chest was heaving, and the shit-eating grin plastered on his face made him look like he’d just gotten laid and was up for round two. He put his camera down and shot Stacie a wolfish glance. ‘Care to dance?’ he asked.

Harris didn’t know what came over him. He wondered if Stacie had paid the bartender to spike the Margaritas with something other than tequila, but he slid from the booth. ‘Sorry, Waters. You’re too late. The lady’s dance card’s already full.’ He offered Stacie his hand before he gave any thought to the very real chance of her turning him down. Certainly after the way he’d behaved toward her, he deserved it. But he needn’t have worried.

She smiled up at him and took his hand. ‘How can I refuse the man who bought my mountain lion?’

They left Kyle Waters in the booth looking a bit dazed as he poured himself a Margarita and drank thirstily.

After the tumble she had taken into his arms Friday night, Harris was a little surprised to see that Stacie was such a good dancer. But then just being comfortable with making a fool of oneself was pretty much all that was required in places like the Boiling Point. And though he wasn’t really … comfortable with making a fool of himself … he was the one who asked her to dance, so he would do his best to act like he knew what he was doing.

‘Are you hoping I won’t fall on top of you and embarrass us both, Harris?’ She asked, almost as though she had read his mind.

‘I’m just a little surprised after Friday night, I guess.’ There was no way for him to approach the topic of her clumsiness gracefully, so he continued to move about the crowded dance floor in front of her feeling very much like he was the one about to fall over his feet while she watched him with her usual inside-joke-smile.

‘I grew up with the Thorne Brothers,’ she said as she moved in close and he held his breath half fearing, half anticipating what would happen next. ‘No one could spend any time with that family and not learn to dance. Dr Thorne thought dance lessons might make me a little less clumsy. Did you know Emma Thorne was a certified ballroom dance instructor as well as a physics professor? It’s the truth, I swear. She taught Ike Thorne to dance. Two fabulous sons later, and the rest is history. Garrett tells me his parents still never miss a chance to tango.’

‘I didn’t know,’ Harris yelled back at her, admiring the way she shook her booty in the tight red trousers that made her stand out in the sea of leather and denim. ‘No one taught me to dance. Your bad luck, I guess.’

‘I don’t care if you can’t dance,’ she said, placing both hands on his shoulders and shimmying like she meant business. ‘Just as long as your here to catch me if I trip.’

‘Oh they helped, but in my case, there was only so much the poor woman could do.’

As the music slowed and the band began to play Meatloaf’s I would Do Anything for Love, Harris settled his hands onto her hips and found he rather liked the way moving with her made him feel less awkward. She slid her hands behind his neck, and he held his breath, preparing for the full frontal rub-up he was both anticipating and fearing. But she surprised him by talking business. ‘Look, I don’t expect you to make the decision to work with me right here and now. I know it’s a lot to take in and I know … well I know how you feel about me. But if you can put that aside and look at what I’m proposing objectively, I’m sure you’ll see that it could be good for everyone. If it’s okay with you, I’ve got a written proposal that should answer all of your questions and clarify anything you’re not sure of, and –’

They found their space invaded by Kyle Waters and his camera. He was dancing with some woman in very tight black spandex, who smiled and blew them a kiss.’

‘Just had to get a picture of this,’ Waters yelled, snapping shots as he moved way less awkwardly on the dance floor than Harris would have liked. ‘Never figured you for a dancer, Walker.’ Before Harris could respond, he continued. ‘I think these shots might be good for my portfolio even if they’re a bit too gritty for your exhibition, Stacie.’

Harris wanted the man to go away, but all at once it was as though Stacie was on exhibition, draping herself over Harris and forcing him into a mock tango that had him laughing in spite of himself. It wasn’t just that, it was the fact that he was now the plaything of clearly the most interesting woman on the dance floor, and people were staring at them, something Harris normally would have loathed, but he was first and foremost male, and he could almost guarantee that there were very few men on the dance floor who weren’t jealous of him. And Harris wasn’t a total stick in the mud. He could certainly play along, letting her sway around him and dipping her dangerously close to the hard wood floor only to hear her squeal of laughter as he pulled her back to him with a little Dirty Dancing thrown in for good measure. All the while Kyle Waters snapped away.

He spun her in a dizzying ring-around-the-roses and she literally tripped and stumbled into his arms, laughing hysterically. ‘Go away, Waters,’ Harris yelled. Photo shoot’s over. Go dance!’ With his arms wrapped tightly around Stacie’s waist, he half marched, half dragged her to the quieter edge of the dance floor, if there were a quieter spot.

Stacie was still giggling, still draped around him up close and personal. ‘Did you just drag me away from the photographer I’ve been propositioning for the last three hours?’ Her voice was breathless and close to his ear to be heard above the driving beat of the music, which had turned heavy metal, a song Harris didn’t recognize.

‘Oh, I’m sorry,’ he said, pulling her way closer to him than was polite. ‘I thought you’d already propositioned Waters. I thought you were now propositioning me, and I’m the jealous type, prima donna, you know? Artsy fartsy and all.’ He was just about to lose all propriety and kiss her when the police showed up.

Grace and KD both believes Freud was right. In the end, it really IS all about sex, well sex and love. And nobody’s happier about that than she is, otherwise, what would she write about?

When she’s not writing, Grace is veg gardening. When she’s not gardening, she’s walking. She walks her stories, and she’s serious about it. She and her husband have walked Coast to Coast across England, along with several other long-distance routes. For her, inspiration is directly proportionate to how quickly she wears out a pair of walking boots. She also enjoys martial arts, reading, watching the birds and anything that gets her outdoors.